Due to the far-reaching societal impacts, developing models and observing systems that enable reliable forecasts of the tropical Pacific Ocean in general and the Equatorial Cold Tongue (ECT) in particular are a high priority. However, global numerical models used for this purpose have significant deficiencies. Several of these deficiencies may result from poorly-constrained parameterizations in the ocean model and/or coarse grid resolution (usually 10-100 km in the horizontal and 10 m in the vertical). For example, upwelling and vertical mixing are two processes that are crucial components of the heat budget of the ECT, but these processes have traditionally been difficult to observe and depend significantly on physics that occurs at scales much smaller than a typical model grid cell. In addition, previous studies have demonstrated that these processes are sensitive to model resolution and parameterization scheme. This collaborative project includes a team of modelers and observationalists conducting and analyzing process-oriented numerical experiments designed to reveal how small-scale (below 500 km, subannual) processes contribute to upwelling, mixing and thereby the heat budget of the ECT, a “pacemaker” of global climate. Scales from about 500 km to 1 km will be addressed with high-resolution, nested simulations in a regional ocean model and scales from about 1 km to 1 m will be addressed with turbulence-resolving large eddy simulations (LES).

(above) Video of sea surface temperature from a high-resolution simulation of the Eastern Tropical Pacific in 1985 that was run for this project.

Earth system models project dramatic changes in marine biogeochemistry and ecosystems over the coming decades due to anthropogenic climate change. However, these projections are derived almost exclusively from models that do not explicitly resolve physical processes on scales below about 100 km. In this collaborative project, a hierarchy of Earth system and coupled ocean-biogeochemistry models are used to investigate how anthropogenic climate change impacts upper ocean biogeochemical dynamics, at scales from global to 1 km. A particular focus is on the subpolar North Atlantic, where Earth system models project that I will see about a 50% decline in biological production during my lifetime. 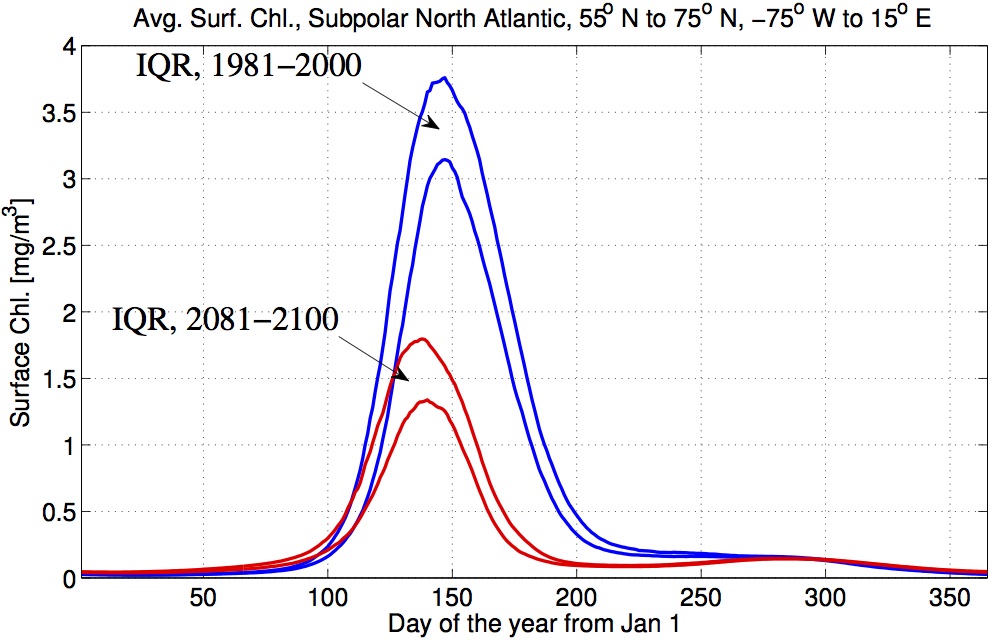 (above) The modeled annual cycle of surface chlorophyll in marine phytoplankton between 1981-2000 (blue) and 2081-2100 (red) in the North Atlantic from a large ensemble of runs of the Community Earth System Model. The inter-quartile range (IQR) of all years and model ensemble members is plotted.

Impacts of subseasonal atmospheric variability on the upper-ocean

(above) Ocean surface current streaks (orange) and thermocline displacements (green) in a large eddy simulation of the ocean under a hurricane. See Watkins and Whitt (2020). Viz by Matt Rehme (NCAR).

With M. Levy and J. Taylor

Every year, marine phytoplankton convert 50 billion tons of carbon into organic form via photosynthesis, which accounts for about half of all primary production on the planet and refuels the trophic base of marine ecosystems. Moreover, perhaps a quarter of the organic carbon created is exported to the deep ocean, where it may remain sequestered from the atmosphere for centuries. Mesoscale (10-100 km) and submesoscale (0.1-10 km) fronts and eddies are ubiquitous in the upper ocean, and process studies indicate that mesoscale and submesoscale dynamics could have a significant impact on marine plankton ecosystems and export. However, the broader role of mesoscale and submesoscale dynamics in global biogeochemistry is still a subject of ongoing study due to challenges in resolving these features in comprehensive global ocean-biogeochemistry models and observing them in the real ocean.

(above) A snapshot of the nutrient concentration in a submesoscale-to-turbulence resolving biogeochemical large eddy simulation of Whitt Levy Taylor (2019).

Near-inertial waves in oceanic fronts: from generation to dissipation

Large scale oceanic fluid dynamics is strongly constrained by Earth's rotation, the primary manifestation of which is the Coriolis force. Near-inertial waves are propagating patterns of oscillatory currents, with periods ranging from about 12 hours near the poles to a few days near the equator, which are restored primarily by the Coriolis force and represent a large fraction the ocean's energy at such short periods (tidal motions represent the other major short-period motion). As a PhD student at Stanford, I explored the full life cycle of near-inertial waves in ocean fronts, including generation, propagation, and dissipation. Via mathematical theory, numerical simulation, and analysis of observations collected at sea, this work reveals how wind-forced inertial motions can extract energy from geostrophic flows and dissipate that energy at internal "surf-zones," critical layers where wave energy is trapped and amplified as it approaches the strongest part of the front in the upper thermocline, similar to surface waves shoaling as they approach a beach. 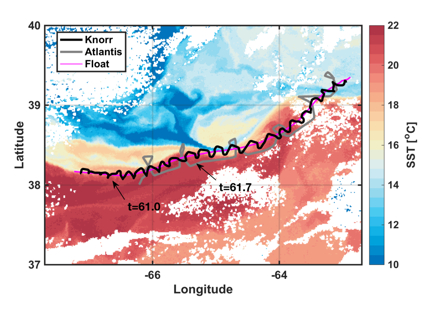 Sea-surface temperature (SST) in color and the paths of the Lagrangian float (magenta), R/V Knorr (black) and R/V Atlantis (gray) during one survey of the 2012 Latmix experiment. 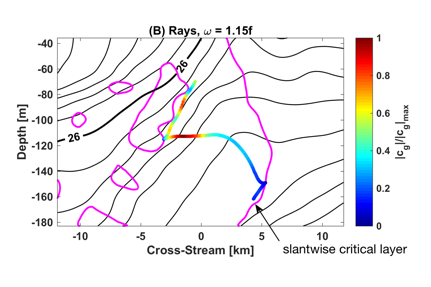 An example ray path for a wave with frequency ω = 1.15f shows that super-inertial waves can be trapped between filaments of cyclonic vertical vorticity and high minimum frequency in the North Wall of the Gulf Stream. In addition, the contours of constant minimum frequency (magenta) are in some places nearly parallel to isopycnals, which is the characteristic signature of a slantwise critical layer where the group velocity goes to zero and ray paths cannot escape.

Commercial aviation is a steadily growing, energy intensive industry. The industry accounts for about 6% of all oil combustion worldwide, and most of the emissions occur in the upper-troposphere and lower-stratosphere. This work explores the vertical transport of commercial avation emissions from cruise altitude and how these emissions might impact surface air quality. The main conclusion is that extra-tropical cruise-altitude emissions are unlikely to reach the surface via dynamical processes because the time scales of vertical mixing from cruise altitude to the surface are much slower than the time scales of wet-removal in these regions. This is true because most of the emissions occur in regions of at least moderate static stability (> 50% of the total) and, moreover, roughly a quarter of the total occur in the stratosphere which is very strongly stratified relative to the troposphere. This work demonstrates the importance of high vertical resolution when trying to resolve vertical transport time scales and it contributes to the larger body of work on the effects of aviation emissions on climate and human health.

Jet fuel burned by commercial aircraft in the year 2006 as a function of latitude (degrees) and tropopause-relative (TR) altitude (km). 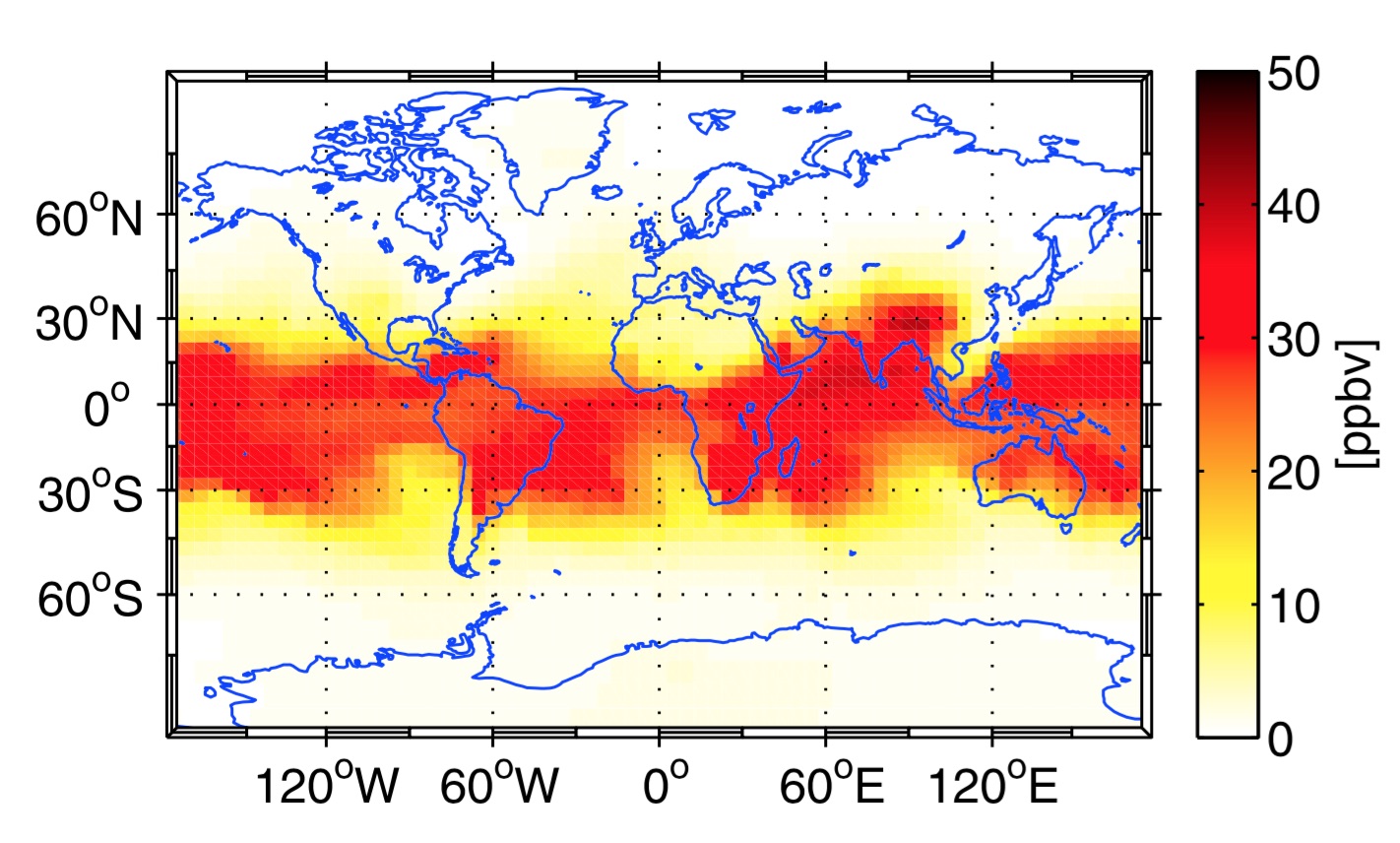